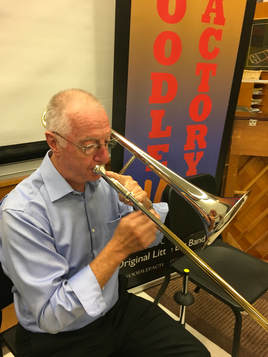 Hugh McGregor, originally from Windsor, has made Goderich his home for the last four decades.  He taught instrumental music at the secondary level in Goderich and Clinton schools. Now, he spends most days staying physically and musically active in the community.
Hugh has been the conductor of the Goderich Laketown Band since the summer of 2007. He enjoys playing trombone in a number of area bands: Noodle Factory Jazz Project, Kincardine Brass Band, Lighthouse Swing Band and his own brass quartet, Suncoast Brass.  Hugh also teaches privately both students who are preparing for post secondary music studies and adults who have interest in nurturing their love of music.
As well as spending as much time as possible practicing and performing music, Hugh plays pickleball and golf.    He is an active member of the Maitland Trail Association and his church community.  Hugh also finds time to travel in Canada, and abroad, several times a year.