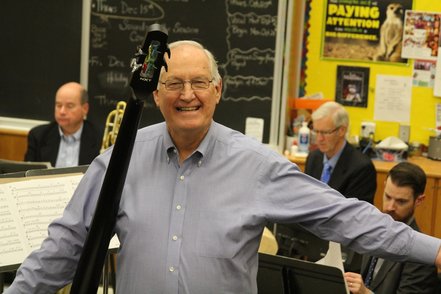 Mike Grace has been a professional musician most all of his life. From playing ranch parties and road houses in Texas to touring the world with his trio or quartet Mike has made performing classical and jazz music his passion. Along the way Mike found an excitement in teaching and when asked by former university colleagues to join the local faculties he readily began a career in teaching with the same passion he had for performance.

Combining university and public school teaching allowed Mike 35 years in music education, all the while continuing a vigorous performance schedule covering many parts of the world. His college and university students as well as his high school graduates became many of the worldʼs finest performers and teachers. It is difficult to separate Mikeʼs teaching and performing accomplishments as they are so melded together.
Among Mikeʼs most treasured moments in education is being named a Disney- McDonaldʼs Performing Arts Teacher in 1996. And, being named University of Michigan Musical Societyʼs Educator Of The Year, the year after retiring from the Ann Arbor, Michigan, Public Schools make these two honors highlights of his professional life. But, the Community High School Jazz Program will alway remain his favorite educational accomplishment, a program of many combos which rose to a level of over 300 performances annually, winning almost every award at jazz festivals world-wide.
Among the many performers Mike has had the great fortune to perform with are Dave Brubeck, Dizzy Gillespie, Mel Tormeʼ, Rob McConnell, Roger Williams, Urbie Green, Billy Taylor, Clark Terry, Dee Dee Bridgewater, Henry Mancini, Jimmy Forrest, Peter Appleyard, Randy Brecker, Rosemary Clooney, Sonny Stitt.